24 Sep The History and Future of Plastic

What Are Plastics, and Where Do They Come From?

Plastic is a word that originally meant “pliable and easily shaped”. It only recently became a name for a category of materials called polymers. The word polymer means “of many parts”, and polymers are made of long chains of molecules. Polymers abound in nature. Cellulose, the material that makes up the cell walls of plants, is a very common natural polymer. Over the last century and a half humans have learned how to make synthetic polymers, sometimes using natural substances like cellulose, but more often using the plentiful carbon atoms provided by petroleum and other fossil fuels. Synthetic polymers are made up of long chains of atoms, arranged in repeating units, often much longer than those found in nature. It is the length of these chains, and the patterns in which they are arrayed, that make polymers strong, lightweight, and flexible. These properties make synthetic polymers exceptionally useful, and since we learned how to create and manipulate them, polymers have become an essential part of our lives. Especially over the last 50 years plastics have saturated our world and changed the way that we live.

The first synthetic polymer was invented in 1869 by John Wesley Hyatt, who was inspired by a New York firm’s offer of $10,000 for anyone who could provide a substitute for ivory. The growing popularity of billiards had put a strain on the supply of natural ivory, obtained through the slaughter of wild elephants. By treating cellulose, derived from cotton fiber, with camphor, Hyatt discovered a plastic that could be crafted into a variety of shapes and made to imitate natural substances like tortoiseshell, horn, linen, and ivory.

This discovery was revolutionary. For the first time human manufacturing was not constrained by the limits of nature. This development helped not only people but also  the environment. Advertisements praised celluloid as the savior of the elephant and the tortoise. Plastics could protect the natural world from the destructive forces of human need. Inexpensive celluloid made material wealth more widespread and obtainable.

The Development of New Plastics

In 1907 Leo Baekeland invented Bakelite, the first fully synthetic plastic, meaning it contained no molecules found in nature. Baekeland had been searching for a synthetic substitute for shellac, a natural electrical insulator, to meet the needs of the rapidly electrifying United States. Bakelite was not only a good insulator; it was also durable, heat resistant, and, unlike celluloid, ideally suited for mechanical mass production. Marketed as “the material of a thousand uses”, Bakelite could be shaped or molded into almost anything, providing endless possibilities. 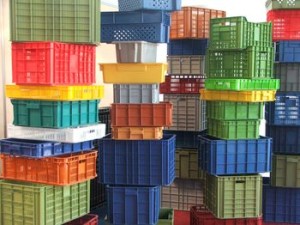 World War II necessitated a great expansion of the plastics industry in the United States, as industrial might proved as important to victory as military success. The need to preserve scarce natural resources made the production of synthetic alternatives a priority. Plastics provided those substitutes. Nylon, invented by Wallace Carothers in 1935 as a synthetic silk, was used during the war for parachutes, ropes, body armor, helmet liners, and more. Plexiglas provided an alternative to glass for aircraft windows.

The surge in plastic production continued after the war ended. After experiencing the Great Depression and then World War II, Americans were ready to spend again, and much of what they bought was made of plastic.

The possibilities of plastics gave some observers an almost utopian vision of a future with abundant material wealth thanks to an inexpensive, safe, sanitary substance that could be shaped by humans to their every whim.

The unblemished optimism about plastics didn’t last. In the postwar years there was a shift in American perceptions as plastics were no longer seen as unambiguously positive. Plastic debris in the oceans was first observed in the 1960s, a decade in which Americans became increasingly aware of environmental problems. In 1969 a major oil spill occurred off the California coast and the polluted Cuyahoga River in Ohio caught fire, raising concerns about pollution. As awareness about environmental issues spread, the persistence of plastic waste began to trouble observers. Plastic also gradually became a word used to describe that which was cheap, flimsy, or fake.

Plastic’s reputation fell further in the 1970s and 1980s as anxiety about waste increased. Plastic became a special target because, while so many plastic products are disposable, plastic lasts forever in the environment. It was the plastics industry that offered recycling as a solution. In the 1980s the plastics industry led an influential drive encouraging municipalities to collect and process recyclable materials as part of their waste-management systems. However, recycling is far from perfect, and most plastics still end up in landfills or in the environment. Grocery-store plastic bags have become a target for activists looking to ban one-use, disposable plastics, and several American cities have already passed bag bans. The ultimate symbol of the problem of plastic waste is the Great Pacific Garbage Patch, which has often been described as a swirl of plastic garbage the size of Texas floating in the Pacific Ocean.

The reputation of plastics has suffered further thanks to a growing concern about the potential threat they pose to human health. These concerns focus on the additives (such as the much discussed bisphenol A [BPA] and a class of chemicals called phthalates) that go into plastics during the manufacturing process, making them more flexible, durable, and transparent. Some scientists and members of the public are concerned about evidence that these chemicals leach out of plastics and into our food, water, and bodies. In very high doses these chemicals can disrupt the endocrine (or hormonal) system. Researchers worry particularly about the effects of these chemicals on children and what continued accumulation means for future generations.

The Future of Plastics

Despite growing mistrust, plastics are critical to modern life. Plastics made possible the development of computers, cell phones, and most of the lifesaving advances of modern medicine. Lightweight and good for insulation, plastics help save fossil fuels used in heating and in transportation. Perhaps most important, inexpensive plastics raised the standard of living and made material abundance more readily available. Without plastics many possessions that we take for granted might be out of reach for all but the richest people. Replacing natural materials with plastic has made many of our possessions cheaper, lighter, safer, and stronger.

Since it’s clear that plastics have a valuable place in our lives, some scientists are attempting to make plastics safer and more sustainable. Some innovators are developing bioplastics, which are made from plant crops instead of fossil fuels, to create substances that are more environmentally friendly than conventional plastics. Others are working to make plastics that are truly biodegradable. Some innovators are searching for ways to make recycling more efficient, and they even hope to perfect a process that converts plastics back into the fossil fuels from which they were derived. All of these innovators recognize that plastics are not perfect but that they are an important and necessary part of our future.

history of plastic, plastic in the environment